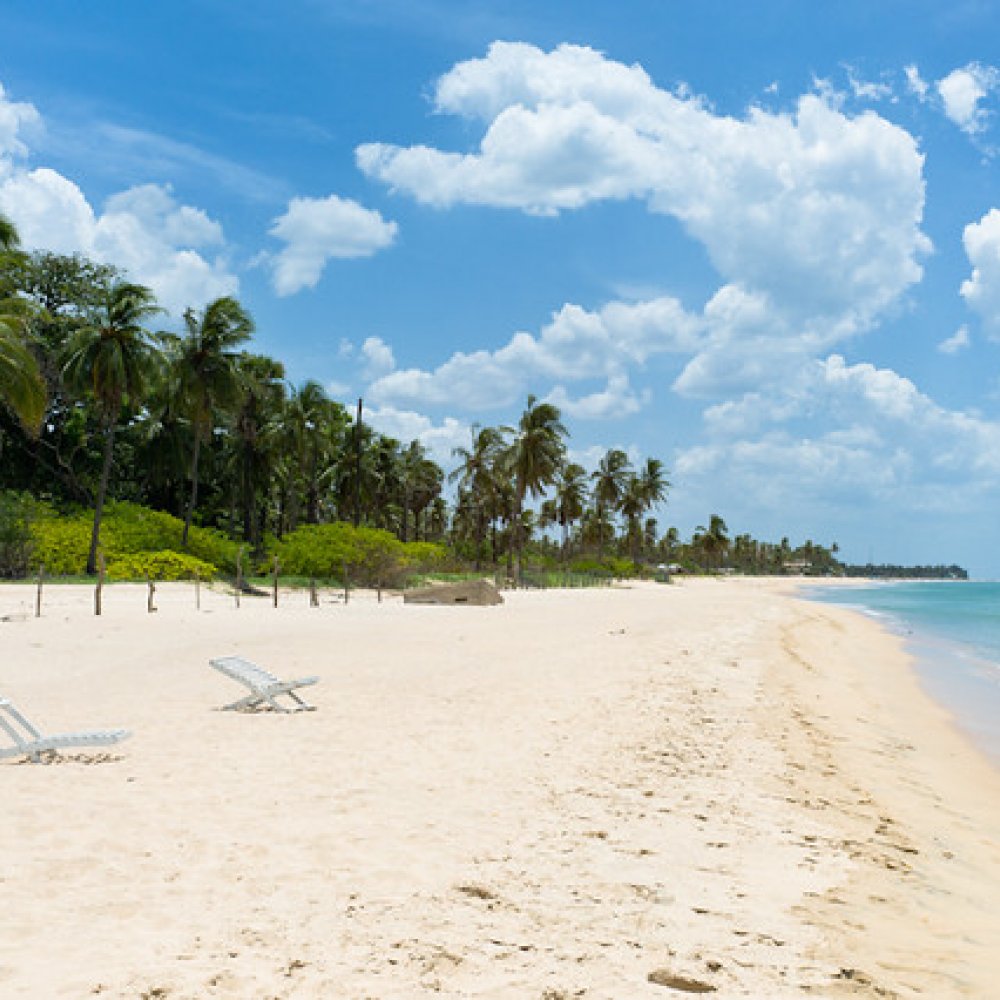 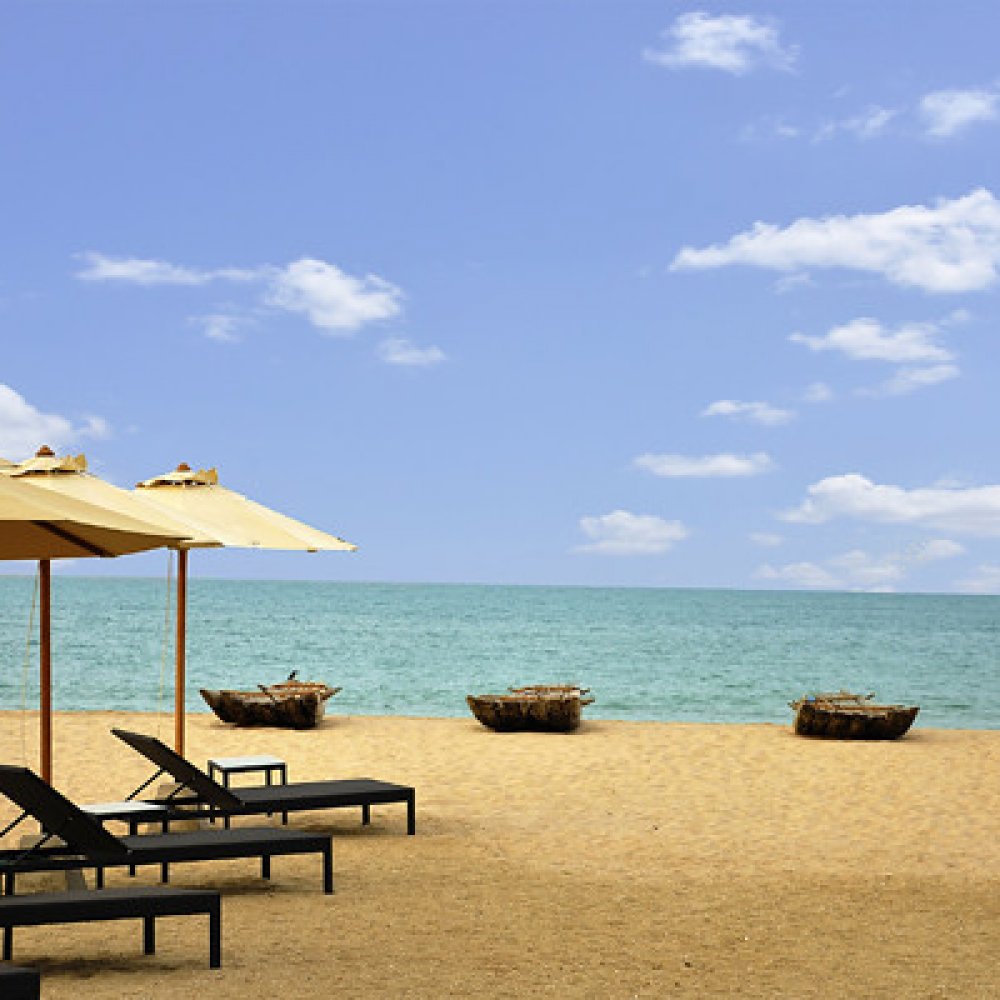 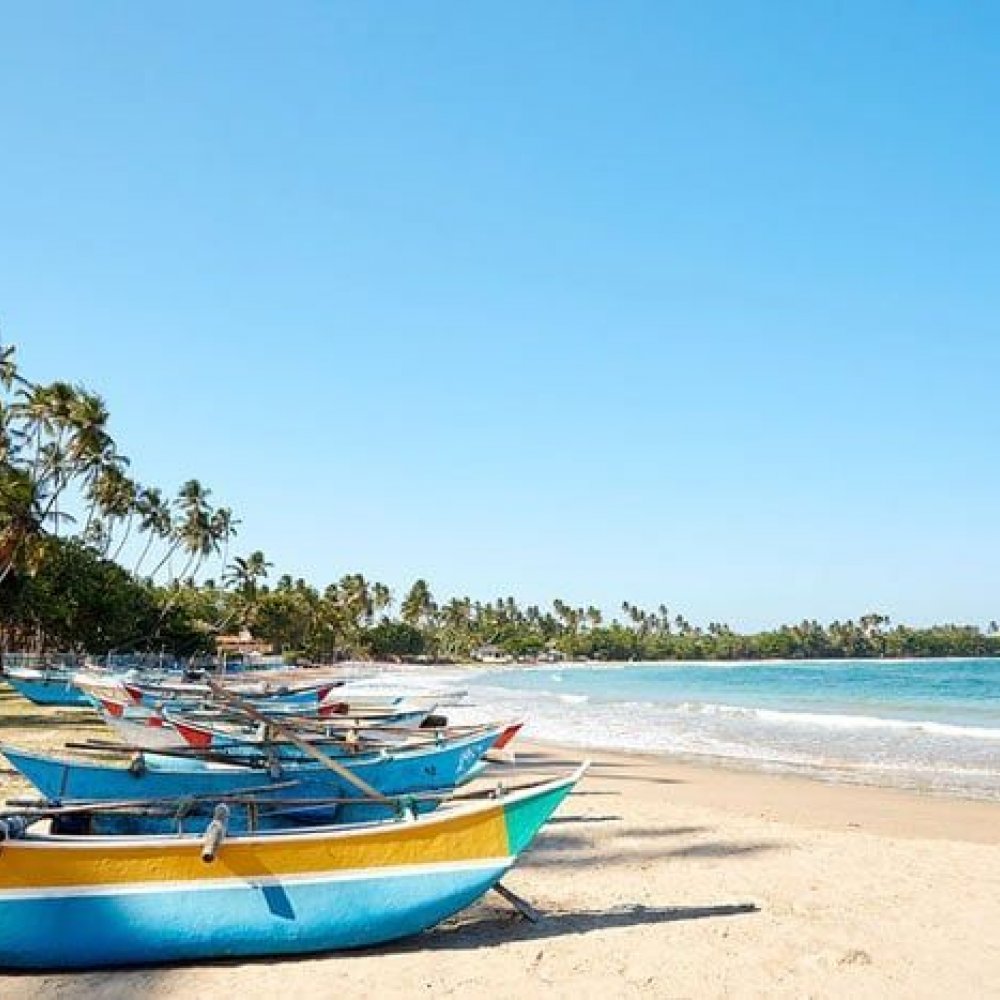 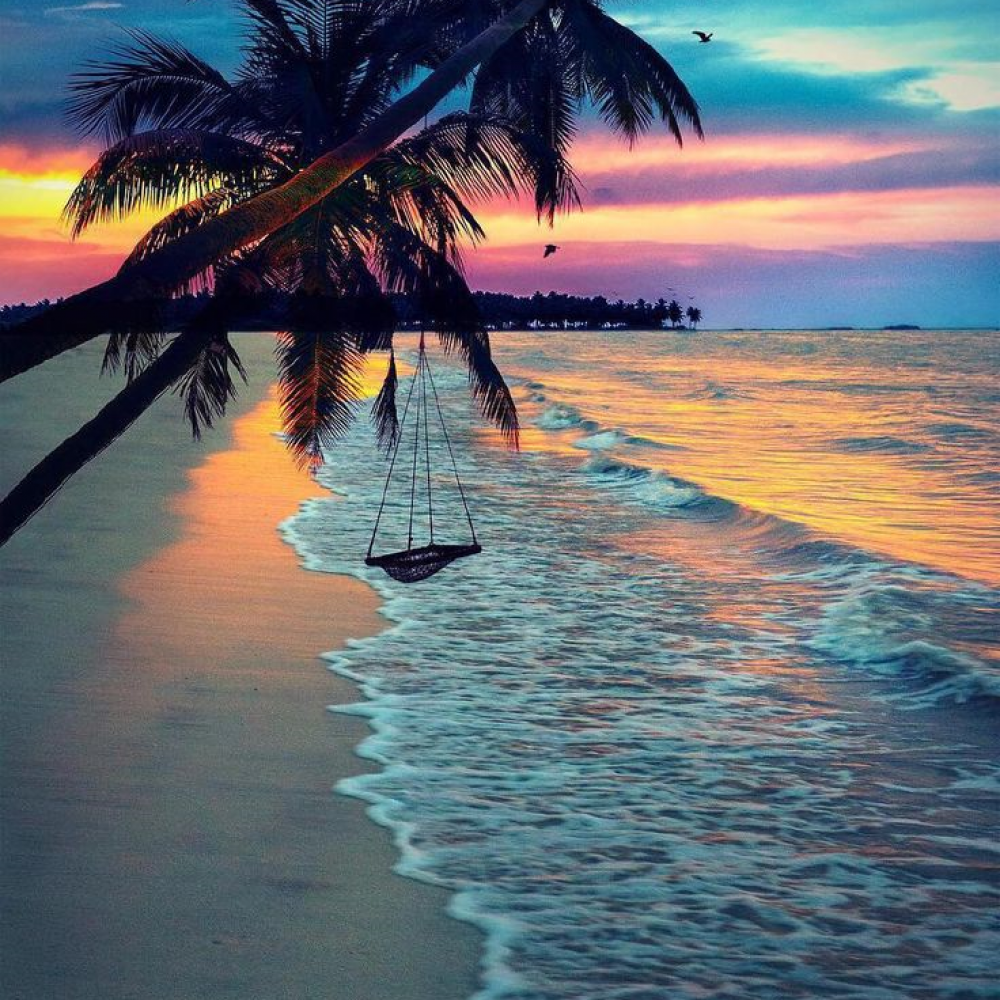 Situated 72 km north of Kandy, Dambulla marks the geographical centre of the island and the Cultural Triangle. It also holds its own treasure – a magnificent temple, which is a series of five caves established as a monastery in the 3rd Century BC. These caves, built at the base of a 150m high rock during the Anuradhapura (1st Century BC to 993 AD) and Polonnaruwa times (1073 to 1250), are by far the most impressive of the many cave temples found in Sri Lanka.Access is along the gentle slope of the Dambulla Rock, offering a panoramic view of the surrounding flat lands, which includes the rock fortress Sigiriya, 19kms away. Families of friendly monkeys make the climb even more interesting. Dusk brings hundreds of swooping swallows to the cave entrance.

The Dambulla cave monastery is still functional and remains the best-preserved ancient edifice in Sri Lanka. This complex dates from the 3rd and 2nd Centuries BC, when it was already established as one of the largest and most important monasteries. King Walagambahu is traditionally thought to have converted the caves into a temple in the 1st century BC. Exiled from Anuradhapura, he sought refuge here from South Indian usurpers for 15 years. After reclaiming his capital, the King built a temple in thankful worship. Many other kings added to it later and by the 11th century, the caves had become a major religious centre and still are. King Nissanka Malla gilded the caves and added about 70 Buddha statues in 1190. During the 18th century, the caves were restored and painted by the Kandyan Kings.

The temple is open from 6am to 7pm,and you are required to make a donation before you enter. Photography inside and outside the cave is prohibited. You have to walk along a vast sloping rock to get to the temple. Of particular note are the colourful frescoes, depicting scenes from early Buddhist history. There are 150 statues of the Buddha here, in varying sizes and attitudes – the largest is 15 metres long. The largest cave measures about 52m from east to west, and 23m from the entrance to the back, this spectacular cave is 7m tall at its highest point. Hindu deities are also represented here, as are the kings Valgamba and Nissankamalla, and Ananda – the Buddha’s most devoted disciple.

Accommodation here ranges from luxurious star class hotel to comfortable little guesthouses. Dambulla is on many major bus routes, but the nearest train station is 22kms away in Habarana. Sigiriya is half an hour away, and you can get to Kandy, Polonnaruwa or Anuradhapura in under three hours.

Dating the Artwork
The evolution of the beautiful caves took many centuries and the artwork represents many periods of cultural history. Buddhist hermits were known to have occupied the caves well before Christian times. Some of the images and paintings have proved difficult to date precisely due to many efforts of restoration and overpainting by royal order. There are more than 2,000 square metres of painted surface at Dambulla, representing the most extensive sequence of historic paintings in Sri Lanka. Some of the best preserved and finest murals of the Kandyan period can also be seen here. The murals depict the flourishing stages of Buddhist art through the ages. There are also many statues and sculptures of the Buddha in various positions, bodhisattvas, deities, attendant monks and several ancient statues of Hindu Gods. All are at least life-size or bigger.

Cave No.1 (Devaraja Viharaya)
The first cave contains a 15m-long reclining Buddha statue. A painting of Ananda, the Buddha’s loyal disciple is also shown. Other statues include seated Buddhas and one of the Hindu God Vishnu.

Cave No.2 (Maharaja Viharaya)
This is the largest and most magnificent of the caves. Over 56m long, it is the showpiece of the temple. There are over 50 very well preserved statues including those of two kings. The main Buddha statue was once covered in gold leaf, traces of which remain. The cave surface is completely covered by stunning murals. Many have thought that the brightly painted ceilings and surfaces are hung with cloth, so fine is the artwork which follows the rock surface faithfully. There is another feature of special interest here. A steady ripple of pure water emerges from the cave roof emanating from a yet unknown source, which devotees claim to be miraculous. The drops of water seemingly flow against gravity upwards from the point of entry, along a crack in the ceiling.

Cave No.3 ( Maha Alut Viharaya)
King Kirti Sri Rajasinghe of Kandy developed this cave in the 18th century. The cave is full of more Buddha statues and frescoes.

Cave No.4 (Pachima Viharaya)
This is a smaller cave with a central Buddha seated under an ornate arch. Thieves had earlier broken into the small dagoba in the belief that it contained the jewellery of a queen.

Cave No.5 (Devana Alut Viharaya)
The last of the main caves, this was earlier a storehouse. There is a massive reclining Buddha with attendant Hindu deities inside.

Yapahuwa
The rock fortress of Yapahuwa lies about 60 km north of Kurunegala. The crag formed one of the temporary royal capitals of the Sinhala kings in flight from foreign interlopers after the fall of Polonnaruwa in 1236. The royal house of King Bhuvanekabahu I set up court here from 1272 to 1284 after fleeing the earlier capital of Dambadeniya. The 100m high rock supported the court on its ledge, a marvelously carved stone staircase leading to where the palace once stood. Three flights of stairs are decorated with ornate freizes of musicians and dancers and guarded by the famous lions at the top of the balustrades. The porch at the top of the stairs has beautifully carved pillars and stonework windows. The view from here isn’t bad either! Unfortunately nothing remains beyond, where the palace is assumed to have been sited. Some experts have speculated that the capital may have even had to move elsewhere before the palace itself could be built. Whatever buildings there were, had been built on the southern side of the rock, with two semi-circular ramparts and a moat for its defence. After a dozen years as the capital, the royal court moved back to Polonnaruwa very briefly and then on to Kurunegala for 48 years.

Kalawewa
Kalawewa, one of Sri Lanka’s most beautiful tanks was built by the great tank builder, King Datusena who had eighteen viharas and eighteen tanks to his credit. These waters have irrigated several thousand acres of paddy land down through the centuries.

Aukana
Considered to be the finest Buddha statue on the island, the ‘Aukana’ is situated approximately 32 miles southeast from Anuradhapura. It can be reached by travelling along the Kurunegala-Dambulla road, or through the Galewala-Kalavewa road. Dating back to the 5th century, the construction of this statue been attributed to King Datusena. The statue including the pedestal on which this standing Buddha is constructed measures a height of 42 feet. The raised upper arm of the right hand, with the palm facing outwards indicates freedom from fear, while the left hand holds the robe. It seems that the statue would have been enclosed in a building, judging from the ruins of a foundation and the walls. However, the present hood over the statue is a modern construction, built to protect this statue from the adverse effects of nature.

Kandalama
The Kandalama area covers a large forest on the edge of an ancient reservoir (‘tank’). Rocky outcrops represent the northern end of the Matale foothills, which peter out above the tank. Built into the face of one of these huge rocks is the Kandalama Hotel, overlooking peaceful waters which were harnessed in the 1st Century AD by King Wasaba. The surrounding forest is home to many varieties of wildlife belonging to the intermediate and dry zones which meet here. Within close range are many places of interest which can be visited from either Kandalama Hotel or The Culture Club across the lake. The archaeologically inclined will be drawn to the ancient sites of Dambulla, Sigiriya, Ritigala, Nalanda Gedige, Anuradhapura and Polonnaruwa. There are several other reservoirs, nature reserves and caves which are great for spying on wildlife. A lovely place to scramble through is the Namal Uyana, or the Ceylon Ironwood Forest. This mantle of beautiful forest covers the Pink Quartzite Mountains, the largest deposit of this mineral in this part of the world.

Sasseruwa
Close to Aukana is another huge Buddha statue standing 12m high. The Sasseruwa Buddha was once part of an ancient jungle cave monastery and definitely worth making the 10 km detour to see it. The incomplete statue stands in an alcove cut into the rock face and a remarkable legend tells of a competition between master sculptor and pupil lasting several years. The more refined Aukana statue said to be the master’s work, was completed first and the Sasseruwa image was left unfinished. 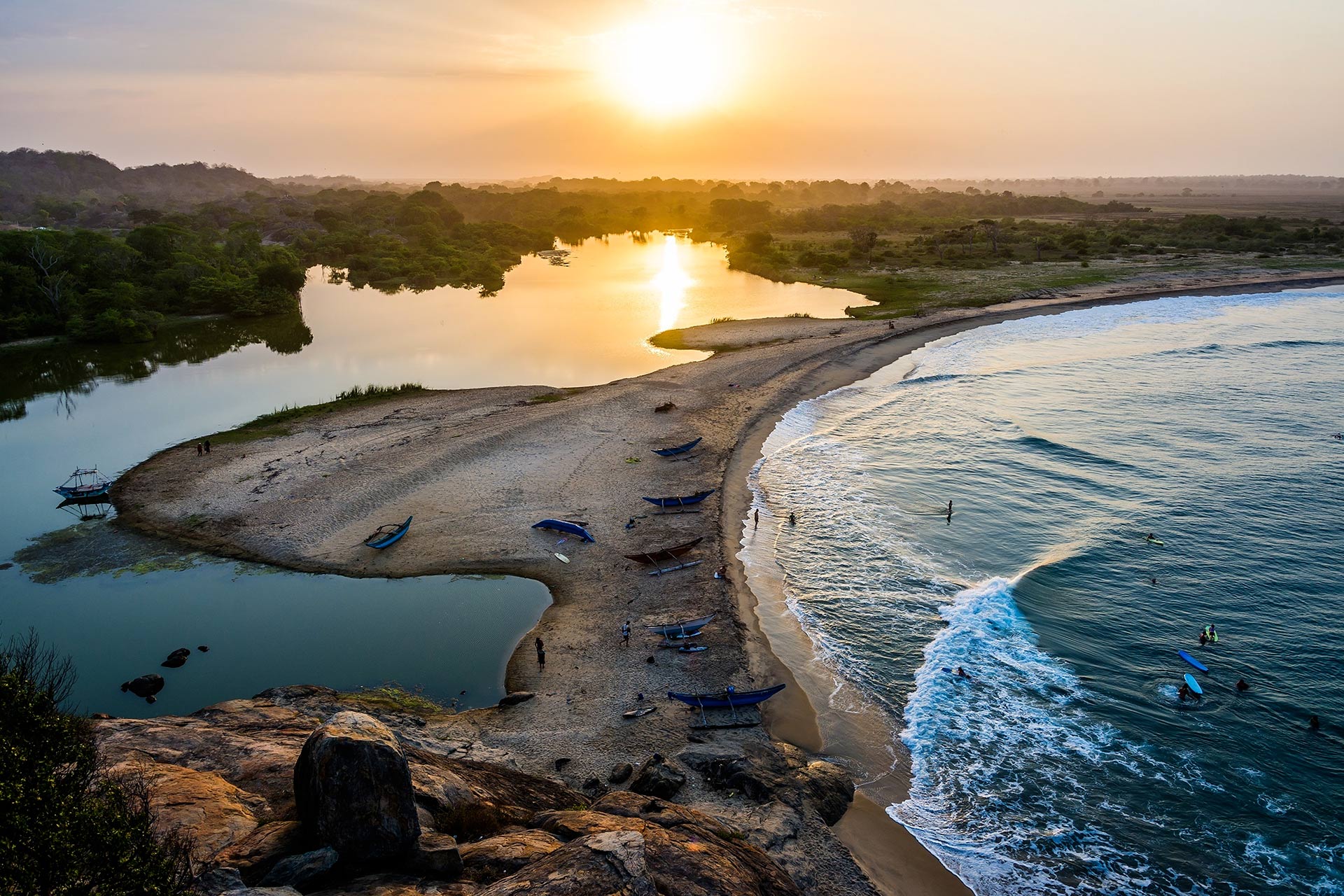 “Because in the end, you won’t remember the time you spent working in the office or mowing your lawn. Climb that goddamn mountain.”